The post below was an excerpt from a post I was writing that would act as my “submission” for the Hall of Nearly Great project. While I wasn’t actually asked to write for it, I thought Jay Buhner would be ideal for it, and I couldn’t think of anyone better to write it. The Hall of Nearly Great e-book came out this past summer and is great, even without me in it – click on the link to check it out.

As for this excerpt, it got a little long and didn’t flow the way I wanted the rest of my “submission” to go, but I liked it on its own and wanted to save it in some way before I edited the hell out of it. It sounds more like something you’d find in a biography than an essay. Hey – there isn’t a Bone biography yet, right? Someone call my agent! Better yet, someone get me an agent! 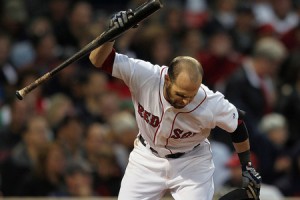 OK – it’s understood that I’m a Yankees fan and take great joy in any kind of Red Sox failure. So with Boston only two games ahead in the AL Wild Card standings after dropping three of four to Tampa in Boston, I’m starting to enjoy September baseball much more than I did going into it.

Going into September, the Sawks were 83-52, a game and a half up on the Yankees for first place in the AL East and 9 games ahead of Tampa Bay. Statistically, they stood a 61.9% chance of winning the division, and a 99.4% chance of making the playoffs. [thanks coolstandings.com] Of all the teams in baseball, only Philadelphia (on a pace to win 105 games at that point) stood a better chance of making the playoffs.

Now, if Boston goes 5-5 in their next ten games and the Rays go 8-2, the Sawks clean out their lockers and work on their golf swings. Boston has gone 4-13 in September, second-worst in baseball (behind Minnesota – WTF happened there?) while Tampa has put together an 11-6 record.

Now while Boston’s playoff chances bursting into flames is fun, it wouldn’t be the worst collapse ever. And no Mets fans (like a Mets fan would read this) – it’s not your 2007 collapse either (which at 99.5% still is a little bit more trainwreckish than what Boston is facing right now). That award goes to the 1995 California Angels, who on August 24th had a 99.9% chance of making the newly expanded playoffs, and came up one game short.

At 67-44, the Angels were 8.5 games ahead of second-place Texas (who also wouldn’t make the playoffs, and 11.5 games ahead of the Seattle Mariners (watch out for them.) The Angels had a tremendous offense led by Tim Salmon (who went a career-best .330/.429/.594 with 34 HR and 105 RBI, good enough for… 7th in the MVP voting? Really?*) and bosted seven regulars with an OPS of .800 or better. However, the team would go 11-22 in its remaining schedule, while the Mariners would go 23-11, forcing a one-game playoff. The Angels put ex-Mariner Mark Langston on the hill, while the Mariners countered with Randy Johnson, one of the players the M’s got for Langston when they dealt him six years earlier.

Did I mention this was Johnson’s first Cy Young season, where he went 18-2, struck out almost 300, and was on his way to establishing William Wallace-like cred by closing out games he didn’t start and ruining happy endings of movies?

The Mariners would go on to crush the Angels 9-1 in that playoff, and the Angels wouldn’t reach the playoffs again until 2002, when they rode the back of some lucky monkey and a clutch rookie pitcher who won Game 7 of the World Series by the name of John Lackey.

Boy, those Sawks could really use a pitcher like Lackey right now. What? Oh, right.

[*Jay Buhner came in 5th that season in the AL MVP balloting, so I cannot complain about any results.]

Last time, we took a look at the first moves in July that teams were taking to make their push to the 2006 playoffs. Sometimes, striking early can pay off, because the market hasn’t really been set and the whole range of potential trade targets is available. Additionally, you get those extra few weeks with your new player, giving him time to adjust to his new team and reaping the benefits of your upgrade.

And we hit the ground running again… END_OF_DOCUMENT_TOKEN_TO_BE_REPLACED

It’s been a while since I’ve done a baseball post, and I want to try to get at least three of these out a week, so here’s my opportunity to get the ball rolling. I haven’t really prepared for this – ideally I’ll keep article ideas in a queue so I have a topic when I need one – but for today I’ll stick by an old reliable: dissecting old trades. I tend to write a lot about these things and there was a lot of activity in 2006, so I’m going to have to break this up into a few parts. Today – the early deals. END_OF_DOCUMENT_TOKEN_TO_BE_REPLACED